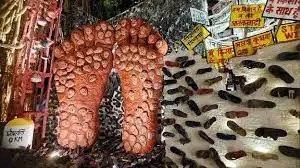 The word pūjā is Sanskrit, and means reverence, honour, homage, adoration and worship. Due to intellectual depravity  of artists and puja committees in Kolkata,  West Bengal, we get to watch in horror that reverence, honor and worship seems to have become synonymous with shoes and chapaals.
Dumdum Park Bharat Chakra puja dares to use shoes and chapaals to decorate the Durga devi pandals of homage and reverence. Should we hope the artist Anirban Das of Dumdum Park Bharat Chakra puja pandal and of course the puja committee that includes Joyjit Das, Prasanta Sirkar, Arjun Goon, Pratik Chaudhuri, Gourab Ghosh, amongst them, probably would not mind accepting a single chaapal as acknowledgement for endeavours in office or otherwise. They have not only shamed the puja committee but every organization they work for. Some of these qualified but ill educated members of Dumdum Park Bharat Chakra puja committee would benefit if they read Sri Sri Chandi which specifies the exact form of Devi Durga in Murti Rahasyam.
The liberty of Hindus has been taken for granted for so long that today we see a whole lot of puppetry with the excuse of theme pujas. The Shastras do not give the leeway that some puja committees end up with, in effect hurting Hindu sentiments in the name of artistic license which works as a proxy for political beliefs.
West Bengal after almost half a century of Communist and Anti-Hindu rule does not fear to hurt the religious sentiments of Hindu community, given that there is no punishment meted out by Indian judiciary or any other hindu aggressive body, like the death fatwas that would ensue if anyone draws the picture of prophet Muhammad. Due to this inherent weakness called toleration,Hindu reverence has been brought down to the knees by political and jihadi activists in guise of artistry.
If Hindus do not allow shoes in temples, it is simply understood that any temporary place of worship, like the pandals, must follow the same rule. Surprisingly all artistic licence must be applied to Hindu worship and never on Muslim or other communities. Have you ever seen picture of Prophet Muhammad in Puja Pandals that play Muslim azaan or are decorated with Muslim symbols? If disrespect of Hindu faith and belief becomes a continuous affair, it is very simple to understand the jihadi support of some political opportunists who disguise as Hindus but will not take time to become a turn coat.
High time the Hindu Asmita reasserts itself and force the Parliament to pass strict laws against such crimes and ensure every thana take immediate cognizance to stop such nuisances and seal these areas so that Hindu sentiments do not get further pained by such inappropriate displays. Political mileage cannot be achieved in any country by hurting the religious sentiments of another, especially so must be in secular India.